While we were discussing the posts on karaikkal ammai and Puli Kaal muni, we had mentioned about Bringhi Rishi. He is quite a character but very rarely seen in sculpture.

He was such a staunch shiva devotee that he refused to pray to anyone other God. Once when he went to visit Shiva in his holy abode of Kailash, he saw much to his discomfort that he was giving darshan ( private audience) with his consort Parvathi seated beside him. Such was the saints devotion to Shiva that he felt that he could not even pray to his consort.

Inorder to overcome the problem, the saint morphed into a bee and flew around shiva three times. There is a version of story which says that its due to this that Parvathi got shiva to offer her half his body ( as Artha naari) . Anyway, she was greatly enraged that this devotee refused to worship her and would only pray to her husband. Enraged, she took back her strength ( parvathi is called shakthi – the life force) since he did not want to pray to her, why would be want her strength alone.

Deprived off this, the saint became a mere skeletal form and could even balance himself, Shiva took pity on him and lent him his staff to learn on which got transformed to a third leg. What happened after this is a longer story which we will see later. ( There is another version which states that as the Saint was walking towards Shiva, Parvathi realised his intentions not to worship her and hence edged closer and closer to Shiva. When the Saint still managed to squeeze through inbetween them,she demanded one half of Shiva’s body – and hence he became Ardhanaari.. yet the rishi persisted and taking the form of a bee, bored through the shiva part and came out !!! so much for devotion)

But we return to the sculpture, had searched high and dry for this sculpture and at last found it in the outside hall pillar in tiruchendur. Though the skeletal form is not well sculpted, you can clearly see the three legs and the arms raised in devotion.

Its been a while since the celebrations of Rajini starrer Shivaji – the boss have died down. But i noticed one very interesting feature in the opening song of the movie.

Sorry again but i am not digressing from sculpture…been quite some while since we went to my favorite – mallai. So today we are going back to see a very unique sculpture, not many notice, few even realise that it is so. We cant fault them for so great is this panel – that is the largest open air bas relief sculpture in the world , hey hang on, I know regular readers are already saying that we carried a full length intro on the mallai penance panel – we also did some interesting comparisons of the test panel nearby as well and drew some conclusions on what is being depicted. However, today we are going to zoom in on a very very unique depiction and end of it you will see the links between the song and this sculpture.

Yes, today we are going to see this diminutive dwarf or goblin ( as many books call them) – faithful assistant of shiva, a very funny guy, right by the side of the boon giving Shiva. But did you notice something wierd in his belly!! Yes, its a tiger or lion face carved splendidly into his belly. Now do you get the reason for pulling in the song !
27942797
Back to hardcore sculpture – What does this signify, is it just the Pallava sculptor showing off his prowess carelessly – are there similar depictions of such belly faces. Thanks to kathie, I have another, which we will see in part 2 of this post plus part 3 holds a new belly face as well.

Btw, this belly face is called a Urdhva Muha ( terror face !)
How many times some of us have been past this panel and not noticed this. Next time i am sure when you visit such places, you would stare at the belly of every statue!!
2780278527822788

I am fortunate to have met so many eager friends in the past 2-3 years – thanks to the net, without their tireless efforts and constant encouragement, this site would’nt have even been conceived. One such is Chandra – for his size, he packs quite a punch, never seen such a dedicated person, oferring constant advise, suggestions, ever eager to assist, take up issues, spearhead movements – selfless acts – such is his devotion to the cause of temple renovation.

He has today shared a very unique and beautiful sculpture of Vyakarapadar / Puli kaal muni ( tiger legged saint) – we have already seen his story in the earlier post of him in the pillar of the big temple.

This exquisite sculpture is from Madhavizhagam , a non-descript village seen next to Vayalur, an ASI monument. What struck me with this sculpture is the unusual seated position of the saint, for a second just close the top half of the sculpture and view the bottom half – you can see the classic lines of a seated or crouched tiger. Such is the beauty and intellect of the artist – that he did not just stop with depicting the feet of the saint as tiger claws, but he has shown the characteristic seated post of a tiger !
27502754

Otherwise the sculpture is splendid, the elaborate hair do of a wandering ascetic, his rosary beads, the classic poses of his hands, the sublime devotion expressed in his face – the benign smile, the closed eyes – he is lost deep in devotion.

Sadly the temple roofing is totally gone and needs water proofing. The Flag staff ( Kodimaram) is stripped out of its copper and the bare trunk ( athi maram) is exposed.

Thanks again to Chandra for sharing this amazing sculpture with us.

its been sometime since we ventured into our art inspired by sculpture series. Our good friend Prasad has come up with a splendid sketch to take us to Belur today.
you can see all his works at his site here
Prasad’s Sketches blogsite

Prasad is uniquely gifted to be able to sketch in such a splendid fashion by just looking at just the picture from a photograph. Inorder for us to understand the task – view the photo and the sketch side by side.

One interesting point to note, ( actually it was the reason for this post to happen) – is this picture. Is it the same elephant ? Got us confused for a sec.

My initial exposure to reading magazine especially tamil ones was the feature where you got to spot the 6 differences. Can you spot such…between these two sets.
274227452739
Lovely work Prasad, and keep them coming. The sculptor would be mighty pleased. 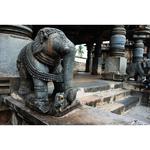 The ‘IN’ thing among todays macho men of the film industry ( thank God for that – else we will have Hero’s who look like beached whales running around trees romancing girls young enough to be their daugthers …we still do!! – but atleast the healthy trend is catching on ) is getting fit and flashing their 6 packs abs ( a yet to be released bollywood blockbuster claims 8 packs!!)

But check out this damsel flashing her abs – sculpted 1300 years ago. Mallai ( mamallapuram) near chennai – the Mahishasuramardhini Panel. Can you spot her, no I am not referring to the Devi. Giving you multiple angles.
2729270527082714271627312720
Can you spot her assistant now…crouched on one knee, brandishing a heavy sword on her right hand, beautifully attired in a breast band , she is poised to strike the leg of the demon Mahisha.

Now, can you see the justification for the tag line, 6 packs abs, take a look at hers. Women were warriors ( and some still are ) and from the shape she is in, must have been a heavily trained one at that.

Time to get up and hit the threadmill i guess.