Happy Deepavali Wishes to friends !! Trying to post on something associated with the basic theme on the origins of the festival. We head back to Mamallapuram, to our favorite relief Panel, to see Vishnu as Varaha, rescuing mother earth – the damsel in distress, rescuing her from the dark depth after slaying Hiranyaksha.

The subtle emotions depicted in this masterpiece of stone crafting – cut into hard granite, as a wall in a rock cut cave shrine, is a feast for our eyes. But then, a chance glance at another sculpture ( haven’t had the good fortune to travel to Rome – yet to marvel at these beauties, but hope someday i would get it – so these images are from the internet and credits given at the end of the post) – a marble masterpiece of Gian Lorenzo Bernini, which he fashioned even before he was 23 years of age, made me wonder. If only the Pallava sculptor had tried his hand at sculpting in marble. Why?? Read on.

The piece we are going to see today is the famed The Rape of Proserpina.

The scene depicted is very interesting indeed. The main characters are Pluto, Proserpina and below them Cerebrus !

You can read the full story on wiki, but jist is

” Venus, in order to bring love to Pluto, sent her son Amor also known as Cupid to hit Pluto with one of his arrows. Hmmmm, vaguely familiar story. Ok, we wont digress, Proserpina was in Sicily, at the Pergusa Lake near Enna, where she was playing with some nymphs and collecting flowers, when Pluto came out from the volcano Etna with four black horses named Orphnaeus, Aethon, Nycteus and Alastor. He abducted her in order to marry her and live with her in Inferi, the Roman Underworld, of which he was the ruler.

Her mother Ceres, the goddess of agriculture or of the Earth, went looking for her in vain to every corner of the earth, but wasn’t able to find anything but a small belt that was floating upon a little lake (made with the tears of the nymphs). In her desperation Ceres angrily stopped the growth of fruits and vegetables, bestowing a malediction on Sicily. Ceres refused to go back to Mount Olympus and started walking on the Earth, making a desert at every step.

Worried, Jupiter sent Mercury to order Pluto (Jupiter’s brother) to free Proserpina. Pluto obeyed, but before letting her go he made her eat six pomegranate seeds, because those who have eaten the food of the dead could not return to the world of the living. This meant that she would have to live six months of each year with him, and stay the rest with her mother. This story was undoubtedly meant to illustrate the changing of the seasons: when Ceres welcomes her daughter back in the spring the earth blossoms, and when Proserpina must be returned to her husband it withers.”

Now, this looks as very much a prelude scene to the Varaha. If the Pallava sculptor had sculpted Hiranyaksha taking Boomadevi, lets imagine so and see this beauty in marble.

From Pluto’s side, see the rippling muscles and masculine force

On the side of Proserpine, its all serpentine curves, the anguish and despair gushes through

Lets compare with Varaha. He holds her up majestically and seats her on his thigh , while she is gentleness personified.

The masterpiece of the young artist, she how he brings in the feel of flesh into stone. How the rough handling of an abductor – The Hands of Pluto on her

and how she pushes at him, the flesh on his face .

Compare the hands of Varaha on Devi, its almost a caress, a loving embrace of the right hand, while the left hand holds a steady yet soft grip on his leg.

Compare to the shyness in the face of Devi, as her right hand is almost moving to touch and feel the chest of her Lord ( notice the left hand is bent under her chin to complete the expression !!)

A thousand years split the two creations, both great masters – One whose praise is sung to this day and the other who chose to remain anonymous.

Want to end the post with these two once again.

Image and content credits :
Ashok and Shriram for Mallai.
Rest: ( if i have inadvertently missed out please let me know, will include) 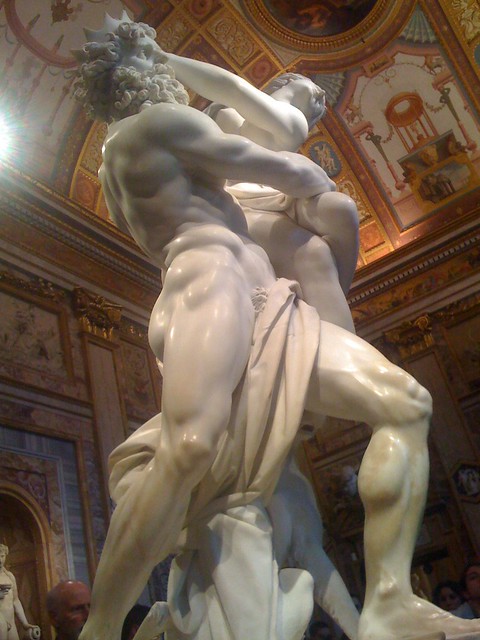 18 thoughts on “The soft embrace of a loving savior Vs the crushing grasp of an abductor!”